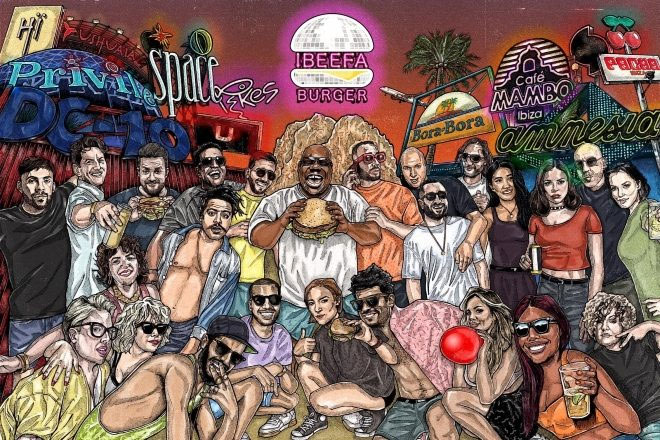 A selection of burgers including vegan and vegetarian options take the names of the world’s biggest DJs on the iBeefaBurger menu, which opened up for business last month.

The menu is lined with comical takes on DJ names, including the Paris Stilton, Hot Mince 82, and Salomon on the ‘Main Room’ menu, with vegetarian option Avcocado Villalobos and some Patty Toppings.

You can also grab yourself a side of Nacheo Plex, Roni Fries or Tale of Hummus, or maybe even some Annie Mac and Cheese.

“When you think of a burger restaurant in San Antonio you might envisage an all-night van with dodgy meat and fist-fights in the queue,” said Kai Cant, co-owner of iBeefaBurger alongside fellow ex-pat Ashley Ienco.

“In fact, people’s expectations of burgers have completely changed over the last decade or so, and we felt there should be something on the island to reflect this. Great music and the great food in an uplifting club atmosphere is what iBeefaBurger is all about,” he said.

In the restaurant, live DJs soundtrack the experience with a set of decks staged amongst the dining area, where Hannah Wants played the restaurant’s opening party just several weeks ago.

An ‘Eats Everything Challenge’ is due to go ahead at iBeefaBurger soon where customers can expect to fill their face with some gourmet dishes. ‘Black Cards’ will also be given to select VIP members for a lifetime free pass at the new burger joint.

Co-founder Ashley Ienco stated, “having organised club events in Ibiza for years, I could see a gap in the market for a music-inspired restaurant that replicated the club experience and brought the party atmosphere to dining.”